Bac an Eich, a remote Corbett in Strathconon

This trip report includes notes and photos from a winter ascent of Bac an Eich (849m), a Corbett above Strathconon in the Scottish Highlands. For a detailed route description, see the Walkhighlands website.

I’ve come to Scotland for a January escape. Scotland may not the most obvious place for a winter holiday – the daylight hours are short and the weather is undoubtedly cold. But I have a few good reasons for coming here…

That last point brings me to Bac an Eich. I caught a window of good weather and decided to make for this remote Corbett on the recommendation of Jimmy. The summit lies above Strathconon, a part of the Highlands that Jane and Jimmy describe as a “hidden gem” (Strathconon doesn’t even have a Wikipedia entry, so it must be a well kept secret!).

I took inspiration from the Bac an Eich route detailed on the excellent Walkhighlands website. The circuit follows road, tracks, and stalkers paths to the summit and back to the car park. The walk takes 6.5-7 which was just enough time to squeeze into the available daylight hours.

In January, the sky doesn’t really start to brighten until just after 8am, and it starts getting dark at around 4pm. Despite having this information at my disposal, I didn’t leave Pinewood until 8:15pm for the 1 hour drive to the start, and didn’t set off walking until about 9:30am. I decided to walk counterclockwise, leaving the long stretch of road section for the end which wouldn’t be so bad if I ended up in darkness.

The walk got off to a fairly easy start. A short walk down the road leads to a track that takes you up to the hill. Eventually you meet a cairn which signals it’s time to leave the track and head for the summit. Walkhighlands mentions “stalkers paths” but any such paths were hidden between a blanket of snow. I had to freestyle it up to the summit, avoiding bogs and steep slopes as much as possible. I’m not going to lie: it was hard going. Although it was cold, the air was still and I was boiling by the time I got to the trig point. And is this not the cosiest trig point you’ve ever seen?! 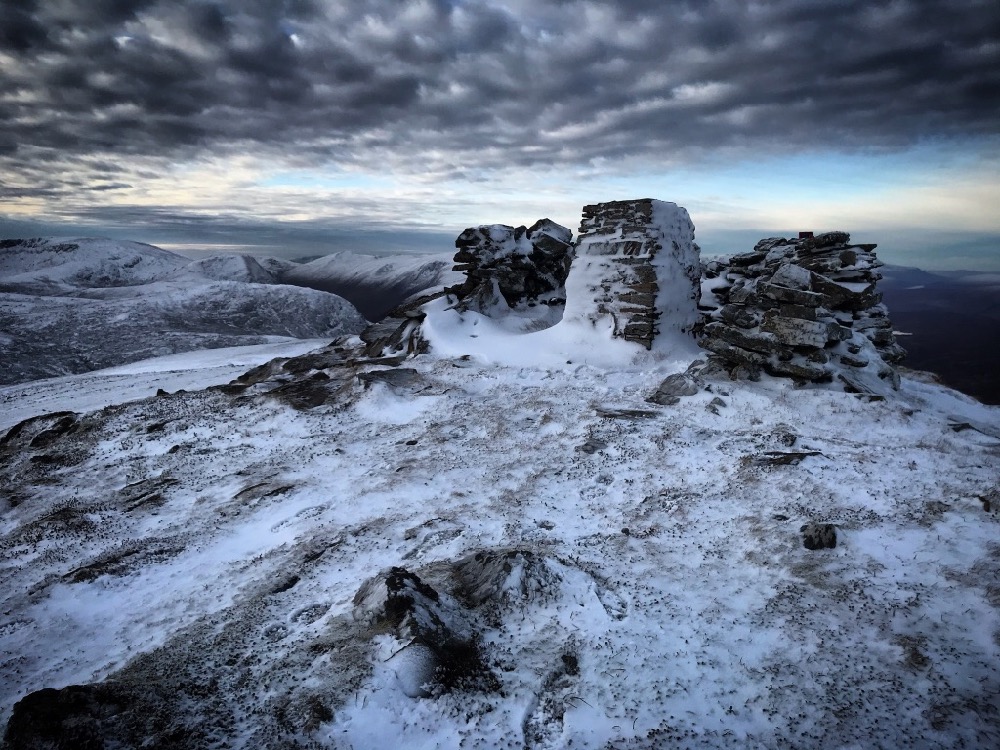 I had visions of lingering on the summit to enjoy the view with some soup. But the mild breeze was enough to swiftly cool me down. So I took a few photos and started my descent, stopping about 150m down for my soup and snacks. The view was acceptable! 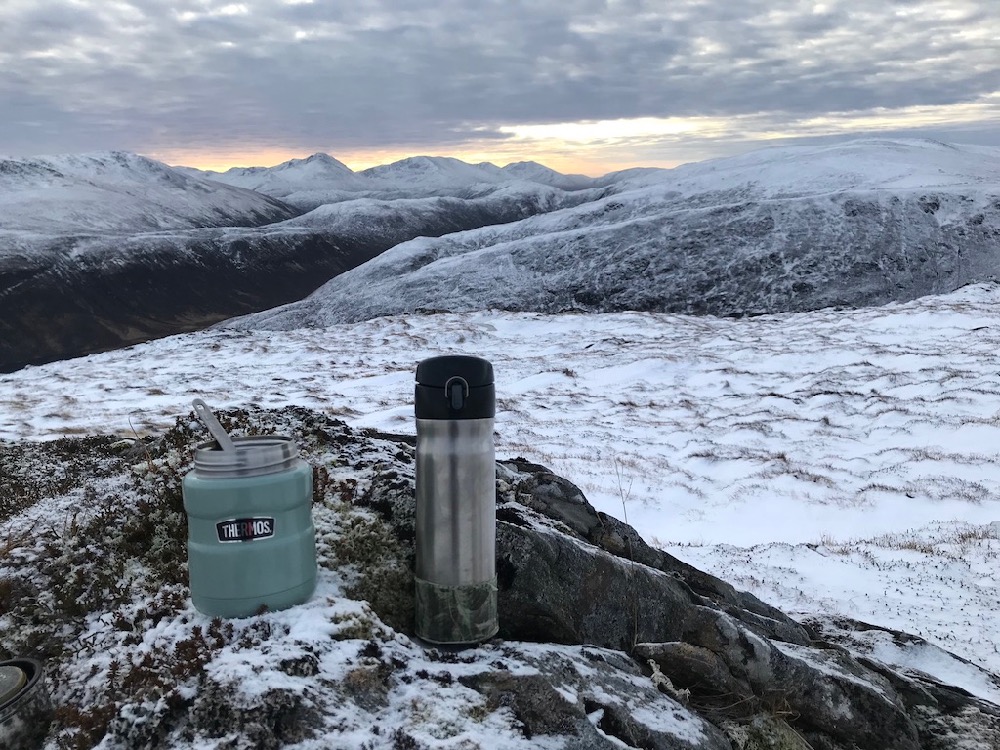 Let’s talk again about those Scottish winter daylight hours. It basically feels like an eternal sunset. When I got to the top of Bac an Eich it looked like the sun was setting and I had a minor panic – but it was only 1:30pm! The sun stayed like that for a couple of hours leaving me with a perpetual sense that I had to haul ass back to the car. (This may explain why my legs were aching the next day.) I was acutely aware that I was testing the limits of my comfort zones… I rationally knew that even if the sun set, I had my head torch, and spare batteries, and a spare phone charger, and GPS on my phone, and two extra warm layers in my bag, and loads of food and water. But I still felt at times uneasy. The unfamiliar terrain (snow) and being super isolated made sense. But it’s surprising how even light can play an effect on the brain! 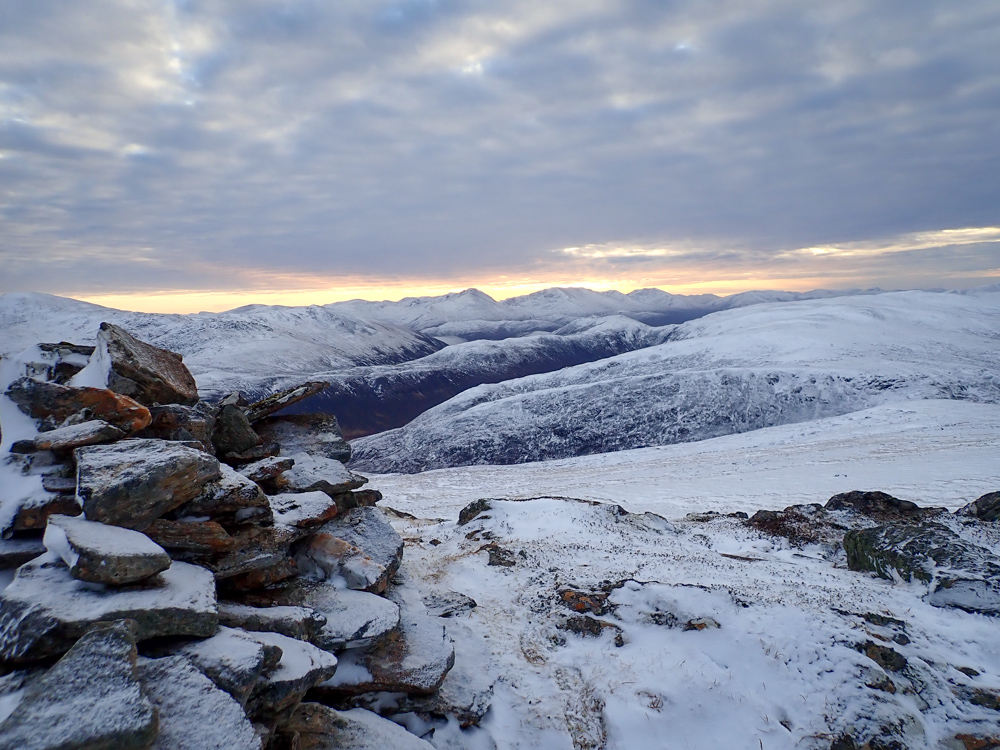 I felt more at ease when I found the track back to the road. There were a few river crossings to contend with which could be challenging in wetter weather. Back on the road, it was definitely getting dark. So I donned my head torch for the rest of the trip and reflected on my day out. I felt kind of bothered that I let myself get so worked up about darkness! But ultimately I felt rewarded for my effort, and willingness to push my limits a bit. Ever since I started doing solo adventures I learned how valuable it is to break out of my comfort zones … I definitely feel a growing confidence, and also an awareness of where my limitations lie (so I can work on them!). Now, it’s time to make some more plans and keep up the momentum. More night navigation is definitely on the agenda (but maybe in warmer weather!).

I’ll finish this tale with some selfies (and one dog photo): 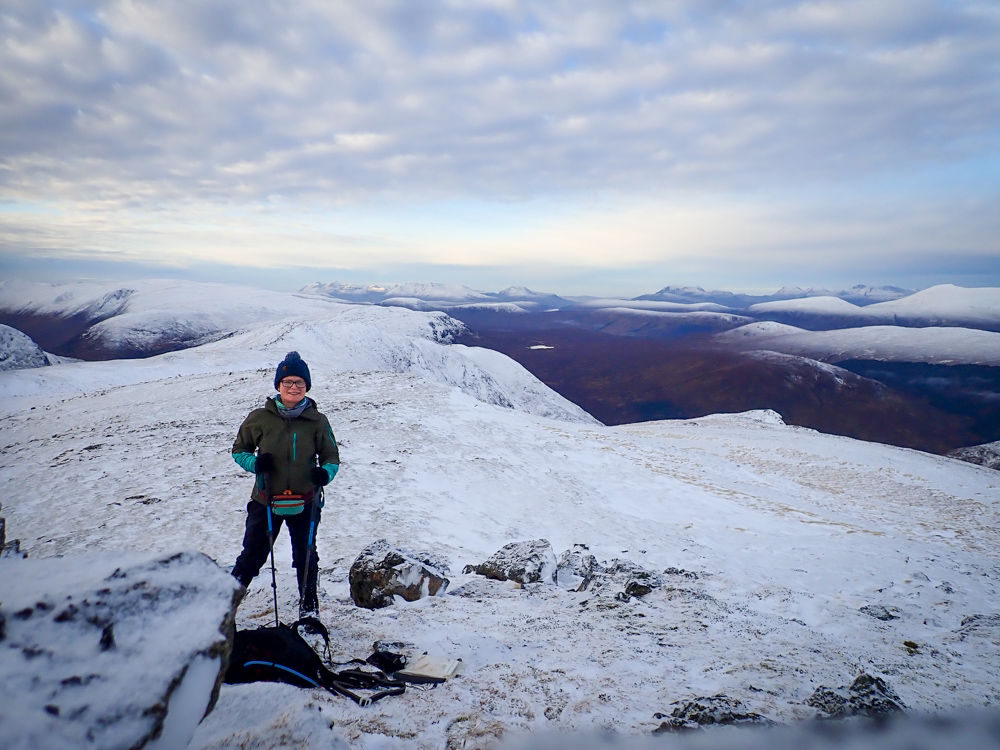 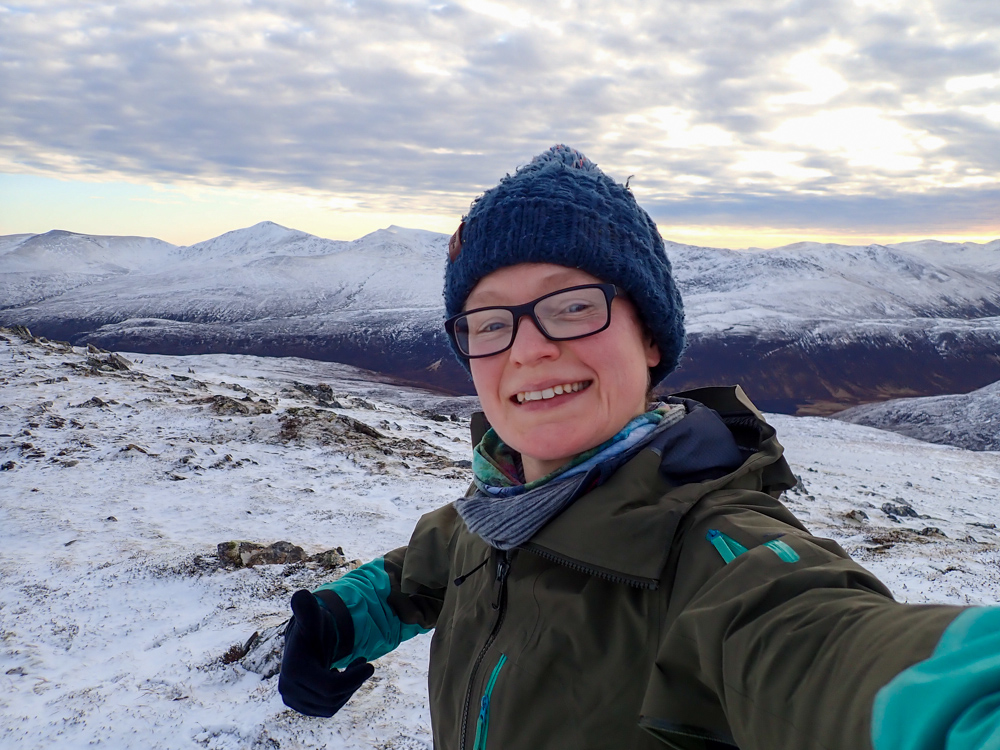 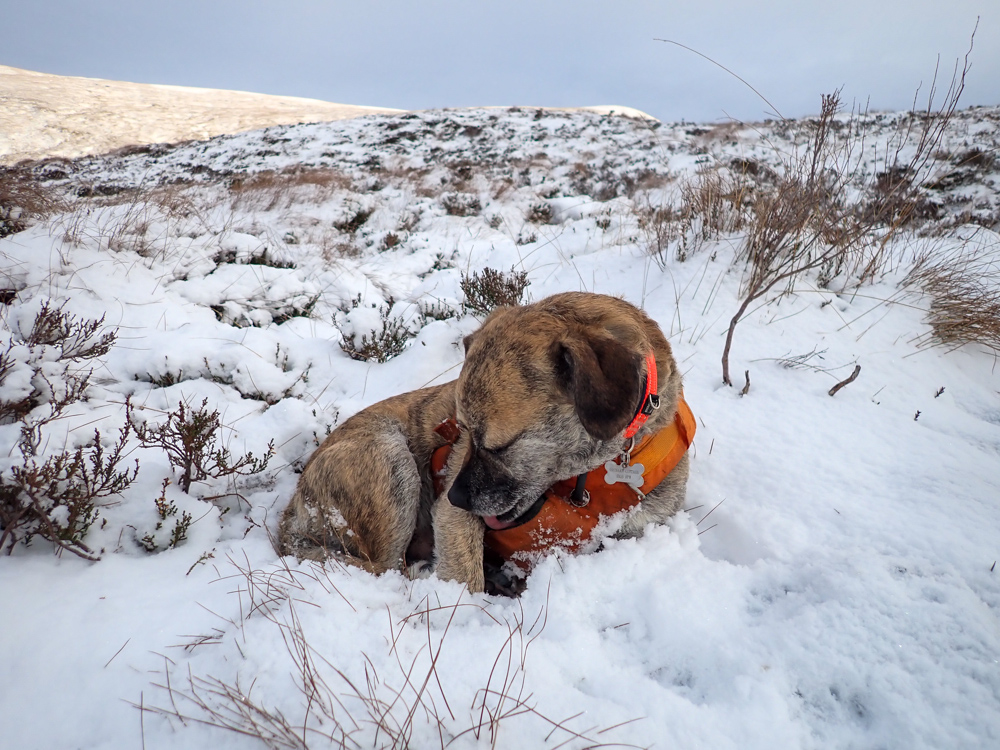 For a definitive guide to Ban ac Eich, including detailed maps and route descriptions, see the Walkhighlands website.

Plynlimon: Wild Camping in the ‘Green Desert of Wales’
Next Post: Loch Glass: the Hidden Side of Ben Wyvis