Day 1 – Saturday 🌧️ departure in the rain – left at around 2pm – stopped off in Fort William for essential provisions including a trip to Morrisons (sounds mundane but when you live an hour away from a real supermarket a simple thing like a Morrison’s is rather exciting!). Also went to Nevisports (recommended) to grab a few extra warm layers and ended up having a bit of a shopping spree (Rab fleece and Mammut trousers for Mark, an ME fleece for me, and gloves for us both!). We were planning for a van night in Glen Shiel. But having left Fort William at around 6pm with the sun setting and the rain pouring, we made an impromptu booking at The Cluanie Inn at Glen Shiel (approx £125 per night including breakfast). Arrived at around 7pm and naturally headed to the bar. Discovered a very good Picpoult! Had fish & chips and a salad (which were OK), then chatted to some young Munro baggers who were looking at Tinder. Lucky had the run of the place and was well behaved. Sleep: Cluanie Inn

Day 2 – Sunday – Breakfast at the Cluanie Inn was very good! Eggs made to order. (“The best buffet breakfast I’ve ever had”, said Mark, adding: “do you remember the Gleneagles one we had? it was fucking freezing!”). Our waiter Ambrose was on it with the free coffee refills. We were having a lovely time until Lucky, who was so well behaved the night prior, bit Ambrose’s leg. So embarrassing, and fortunately no real harm done. Still, it hurried us to the hills! Met up with the J&J from Pinewood Steading for a walk up Càrn Ghluasaid. It was a great walk but Mark got cold at the top – more gear experiments required! Instead of bagging more hills we headed back to the Cluanie Inn for a pint … and another night’s stay. The Cluanie Inn is owned by The Black Sheep Hotels Group, which is further owned by the Mars Hospitality Group, based in Mumbai. As such menu features som Indian specialties. So for dinner, rather than going for the usual pub fare, we decided to sample some of the traditional Indian dishes that were on the menu: dahl makhani, roast cauliflower biryani, and paratha. It was so good we had to give our compliments to the chef who promised he’d send me recipes … I’ve yet to receive an email. Sleep: Cluanie Inn

Day 3 – Monday 🌧️ – Breakfast again (Lucky stayed in the van). Gwenyth was not as on it with the free refills. Breakfast was a la carte. Still good! And I learned so much about HP sauce (“Houses of Parliament”). We checked out from The Cluanie Inn – the van was calling! It was a poor weather day so good for travel. Drove to Ullapool with our sights set on the Seafood Shack for lunch. Ordered the “spicy soup”, but unfortunately it was more like a bowl of oil than a bowl of soup – not appetising. After some deliberation, we complained, and the woman working behind the counter (who I’m pretty sure was the owner) swiftly gave us a refund and offered to make us something else. We noted that their haddock wraps were massive so she said “how about two kids wraps?” which she kindly gave us for free. Fried haddock with loads of salad in a wrap thing. And guess what – it was freakin’ delicious. So good we almost went back to pay for them! (Almost.) Then…To the north! Stopped in Lochinver for logs (which were stupidly big like the Seafood Shack adult portion haddock wrap – is it a northwest Scotland thing? “Everything’s bigger in the NW” much like “Everything’s bigger in Texas”?) and parked up at the Walkers Car Park at Glencanisp Lodge, the start of the walk up Suilven. We planned to hike into Suileag bothy – our bags were packed and everything – but met Jon Taylor Photography who was also headed that way. Not wanting to share the bothy, we abandoned the idea for a van night – it was ace! Figured out the tarp setup. Had a wok dinner – tofu green curry. Amazing stars – the Milky Way was incredible! Sleep: Walkers Car Park at Glencanisp Lodge

Day 4 – Tuesday ☀️- The day we discovered the boiled egg and banana breakfast. (Need a good van toast option). Suilven or bust. By not staying in the bothy we added an extra 1.5hrs to the walk. And we felt it – it was a LONG undulating walk in to the hill via Suileag Bothy where we had 2nd breakfast and met Jon who informed us of his poor sleep due to mice – turns out the van night was in our favour! Steep ascent and clear views at the top – rare to have weather this good. Saw Stac Pollaidh (Polly) in the distance and knew our destination for Wednesday. Lots of characters about. We liked the old dude who’d been up Suilven 20+ times: “I come every year and I’ll do it until I can’t”. Love that. The walk back was, well, long. Went on a pointless mission to find another van stop but ended up returning to the car park for more fire side drinks, fried rice, and chill times. Sleep: Walkers Car Park at Glencanisp Lodge

Day 5 – Wednesday – The plan was to go walk up Stac Polly then head south via Ullapool for a shower. But the shower took priority! I was pleased to discover the Ullapool shower is still amazing, hot and great pressure (though the door was locked but we rectified that with our own key – perhaps they don’t have staff to maintain it during off season?). Then back to Stac Polly for a walk and to admire its geological marvels – unmissable and outwardly ominous from the road. But a good track to the top allowed a closer look. The mountain itself consists of Torridonian Sandstone that sits on a bedrock of Lewiston Gneiss, the oldest type of rock in Britain. During the last ice age, the top of Stac Pollaidh poked out above the ice sheet (a geology thingy called a ‘nunatak’) and was exposed to thousands of years of freeze-thaw weathering that give it its sharp crags and iconic spires. After Stac Polly we tried a park up down the road, even had a fire, but the wind was so bad we abandoned ship! Went south of Ullapool to Lael Forest Garden car park right off the A835. Great find! Less wind, sorta flat, and just what we needed. Cooked IN the van on the jetboil with the wok! Sleep: Lael Forest Garden car park

Day 6 – Thursday – Headed further south with the intention of doing Ben Nevis on Friday. Weather was bad so another great travel day. Stopped at the Midge Bite cafe at Achnasheen for breakfast! It was OK. The best part was finding a spontaneous random place to stop just when we happened to fancy coffee and some food! (Random road trip moments!) We were the only people there when we arrived. Onwards. Stopped at the Glen Shiel battlefield (1719) site and went up ‘Spanish hill’ where there remain some ‘breastworks’ from the battle. Very interesting place and worth a visit – a surreal place to visit, seeing how a battle took place on hills around a glen. The battlefield roadside sign doesn’t do it justice. Stop and get out of your car and go up the hill! Onwards to Fort William to once again stop at Nevis Sports, to buy a bothy shelter. Then for an ok stop at the vegan cafe which I’d hoped would offer a good opportunity to do research but wasn’t quite right – and they were out of most things on their menu! So we went to Morrisons and discovered that Ellis Brigham is awesome – very knowledgeable staff! Mark bought his ice breaker marino top – game changer. En route to our van park, drove by B&H autos which we knew to supply roof racks and boxes, so went in and ordered them with the help of some very helpful folk – installation next week, watch this space! The park up was just outside the Ben Nevis Inn – considered going in for a drink but the atmosphere was not right. Opted to hang out in the van instead despite frequent passerbys and general lack of privacy! But we had a great stay all the time – chatted with a few nice folks. Decided that everyone looking at us must think we are living the dream, hanging in the van we made, having G&Ts, cooking’, about to go up Ben Nevis – amazing! Sleep: Parking area just outside Ben Nevis Inn

Day 7 – Friday – Ben Nevis! The weather was questionable – Met Office suggested reasonable weather but MWIS was doom and gloom and it’s hard to tell by inspection when you wake up in the dark! But we committed and the Met Office was right. Boiled egg and banana breakfast! And we were off by 8am! We took the Ben Nevis route via the mountain path – basically a long walk up a big hill with some annoying rocky / scree / crap but generally straightforward. Some quite steep bits up to 45 degrees. T-shirt weather until the last couple hundred meters of ascent then it was all layers! No view at the top – but that’s too be expected. Mark had a eureka moment with his clothing / layering – he wasn’t a sweaty beast in his merino base layer + paramo + rab hoodie. Progress! Sleep: home! 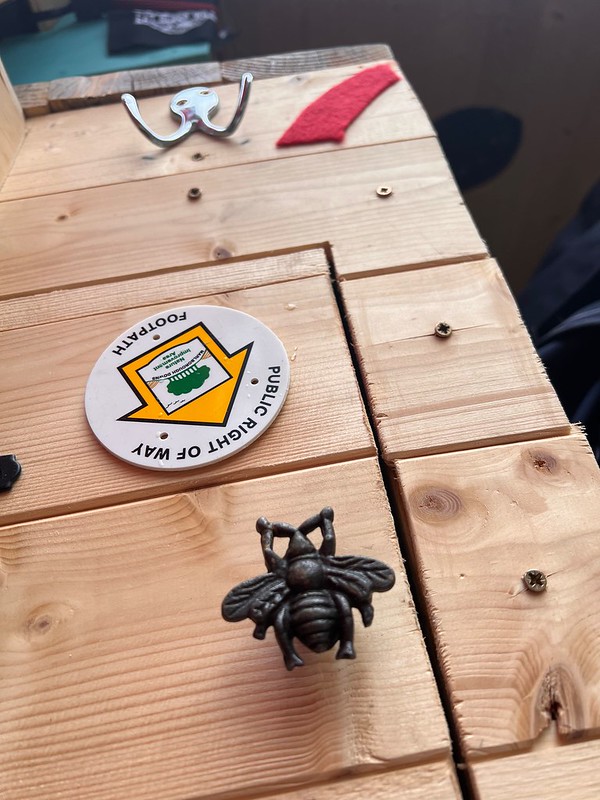